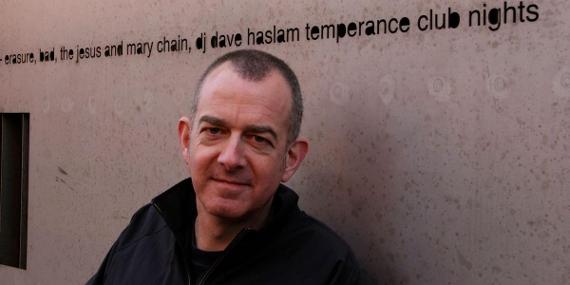 DJ and writer Dave Haslam DJ'd over 450 times at the legendary Hacienda in Manchester during the late 1980s and has since DJ'd worldwide (including shows in Peru, New York, Berlin, Barcelona, and Italy.

He made his debut at the Hacienda on May 1st 1986. Ian Brown, Tim Burgess and the Chemical Brothers all later credited his eclectic Thursday night sets as an inspiration. In 1990 he toured America with Mike Pickering, Graeme Park, and Paul Oakenfold. Since the early 1990s he has hosted a variety of successful club nights in Manchester, including 'Yellow' at the Boardwalk. He's played afterparties for New Order, Gorillaz, and Depeche Mode, and DJ'd in Paris many times; during Paris Fashion Week 2011 he headlined at a Paul Smith party at Cafe Carmen and has twice played at the prestigious Rex club in Paris (the latest, in 2018).

His recent DJ gigs also include a performance at Panorama Bar (Berghain) in Berlin (August 2015); and a headline set at the Electropicales Festival - Île de la Réunion - (May 2019).

He attended Joy Division's last ever show back in May 1980; since then, Sonic Youth have slept on his floor; Tony Wilson threatened to shoot him; he took John Peel to see Public Enemy; he's cooked cauliflower cheese for Morrissey; Neil Tennant introduced him to Tracey Emin; and he appeared in the film 24 Hour Party People and in Carol Morley's The Alcohol Years.

In 2017 he co-curated 'So It Goes' a collaboration between New Order, Liam Gillick, and a 12-piece synthesizer orchestra which was commissioned by Manchester International Festival. This special New Order project was later presented in Turin and Vienna.

In 2018 he curated a weekend of events in a converted church in Parma, Italy which included live music by LIINES, several in-conversation events, and the Italian premiere of the Sky TV documentary 'Decades' about the 'So It Goes' show.

In 2018 he staged an anti-racism event in Manchester called 'One Nation Under A Groove', an all-day club event set up as a response to various pronouncements by the former Smiths singer Morrissey. The event attracted widespread support, but also some controversy, which intensified after the singer's tour was cancelled in the weeks leading up to 'One Nation Under A Groove'. The story was covered across the international media; including NME.

Other times on Saturday 5 February