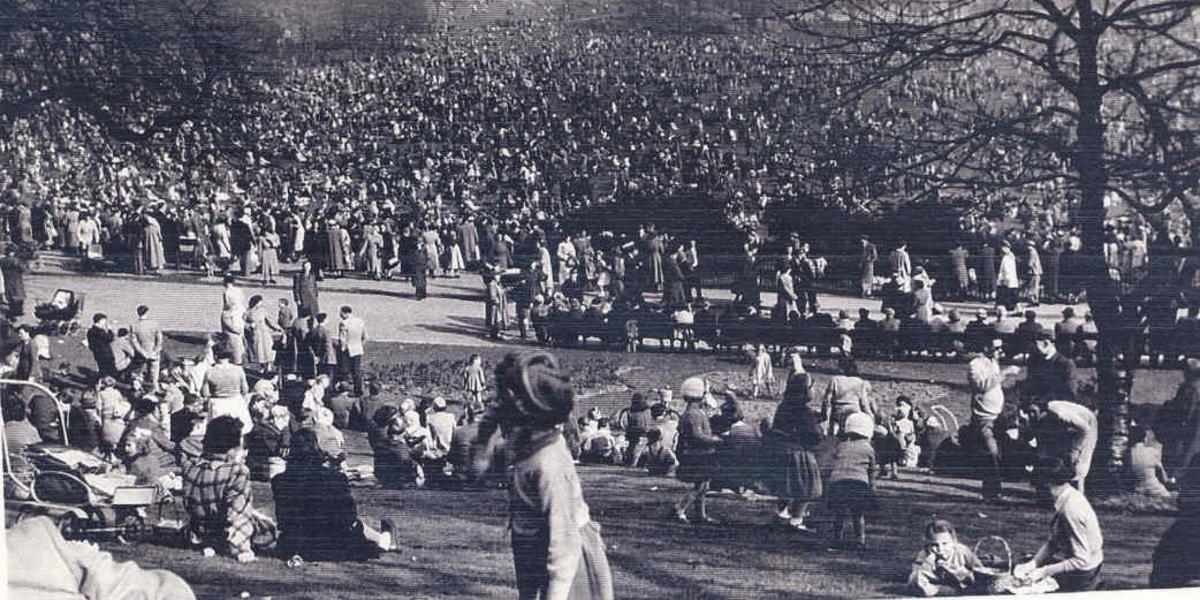 Preston's ever-popular and annual Egg Rolling event on Avenham and Miller Parks is a favourite amongst locals and visitors. Each year you can look forward to an Easter Bonnet competition, bundles of entertainment and, of course, lots of Egg Rolling! All this and more has been enjoyed for over 150 years from when the first Egg Rolling event took place on Avenham Park.

At the beginning, the annual Egg Rolling event on Avenham Park would have involved rolling decorated eggs down grassy hills. These eggs were known as pace-eggs and were originally a Lancashire custom. Pace-eggs were traditionally decorated by wrapping the eggs in onion skins and boiling them to give the shells a golden mottled effect. Children would then roll their pace-eggs down the hills and see who could get theirs the furthest without it breaking. It was also tradition to destroy any remaining shells on the grassy hills, otherwise Lancashire witches could steal them and use them as boats. 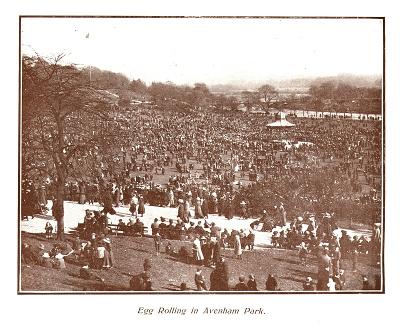 Today the Egg Rolling on Avenham and Miller Parks mainly sees a more modern version of rolling chocolate eggs down its steep slopes.

Though the tradition of Egg Rolling had always been popular in Preston, the Easter pastime of rolling eggs down hills first began on Avenham Park in 1867. At this point the park was still under completion and wasn't officially open, however, its potential as the ideal Egg Rolling spot was clearly recognised by the people of Preston as they flocked to the park, eggs in hand.

Attending the first Egg Rolling event on Avenham Park was a correspondent from the Liverpool Mercury whose report read:

'I spent Easter Sunday in Preston, which is, to my mind, the pleasantest and brightest of all your northern manufacturing towns, and as much unlike and superior to its neighbour, Blackburn, as light is different from and better than darkness.

'I never saw the festival of Eastertide don such an air of thorough-going festivity in any town as in Preston. The people have a park there - nestling snugly on the brink of the river Ribble, so famous for its salmon; and though this park is miniature of all its race it is so well ordered, so tastefully laid out, so entwined and enfolded in beautiful walks, so dotted with fountains and streams and miniature lakes, and so picturesquely situated, that it is a very gem of parks.

'On Easter Sunday - a day, happily, of radiant sunshine and evenly-tempered breeze, inviting everyone to pleasant strolling - the park was full of folk, and its slopes were dotted with thousands of people broken into hundreds of happy-faced and ever-varying groups quite refreshing to look upon. But the sight of all others which had most seductive attractions for me was one which embodied what I am told was an old and long observed local custom, of a quaintly curious character. 'The children at Eastertide are all supplied with what are called

'pace' eggs - eggs boiled in different dyes by which they are stained, and some very beautifully, with various colours. These eggs are taken to the park on Easter Sunday and Monday, and rolled by the youngsters against each other, for the sole purpose, so far as I could guess, of seeing which would be soonest broken.

'Thousands of eggs were rolled in every direction, children were everywhere laughing and capering in infantile pleasure, the elders were looking on with a more staid and demure, but not less hearty enjoyment, and altogether the scene was one of the strangest and yet most thoroughly happy and enjoyable that I have seen for years'.

After the first Egg Rolling festivities in Avenham Park, it became tradition for locals and residents of nearby towns to congregate in the park on Easter Monday and roll their pace-eggs. Churches would also contribute to the festivities of the day, holding tea parties and entertainment. Though Egg Rolling events still take place every Easter all over country, Preston's has grown to be one of the biggest and most well-known, featuring plenty entertainment, food, and more.

To discover even more of Preston's fascinating history, including its parks, buildings, and military history see Preston's History.