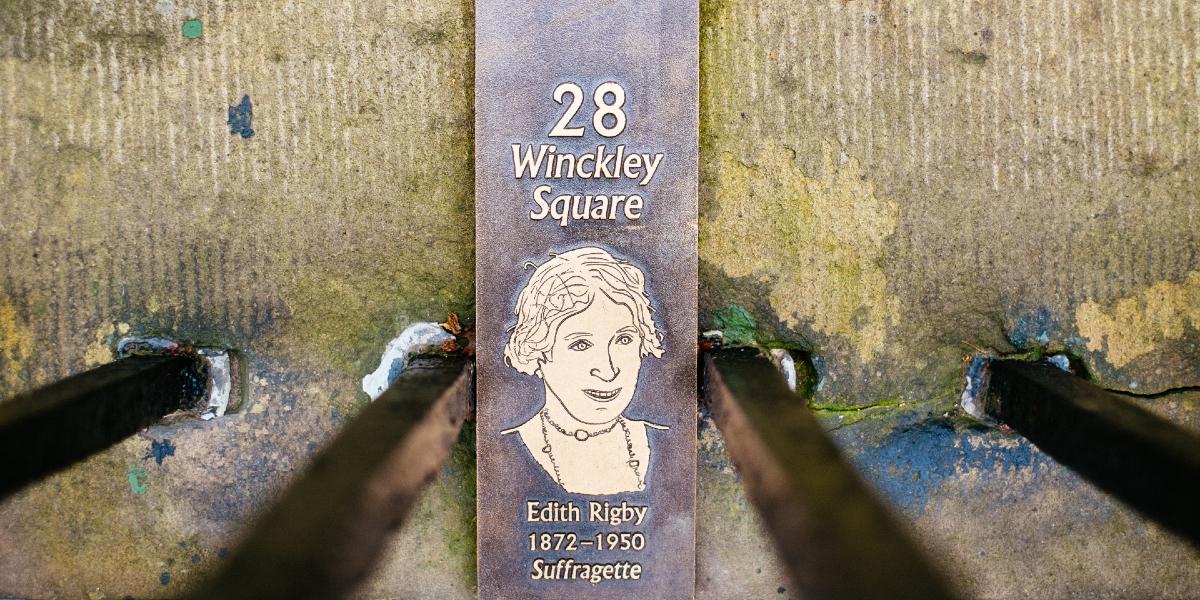 We take many of our modern liberties for granted, not least free education and the right to vote, but these both began with political activism and the work of social reformers like Preston's champion of women's suffrage, Edith Rigby.

Born Edith Rayner in 1872, Edith was the second of seven children to surgeon Alexander Rayner. Many of her father's patients were from Preston's working classes, sparking her early awareness of social and economic inequalities.

Edith married doctor Charles Rigby just before her 21st birthday, moving to 28 Winckley Square. However, marriage didn't settle Edith's determination for equality; she became involved in working for social reform, initially improving the lives of women and girls in local mills. In 1899 Edith founded St Peter's School which gave girls the opportunity to meet and continue their education beyond the age of 11.

During her time living in Winckley Square, Edith became critical of how her neighbours treated their servants. Though the Rigbys had servants themselves, they allowed them to eat in the dining room and they were not required to wear a uniform. This became a passionate issue for Edith and saw her going to London and disguising herself as a servant to find out how they were treated. She did this for two weeks before her husband and a private investigator tracked her down and brought her home.

In 1905 Edith joined the Independent Labour Party, forming a branch of the Women's Labour League in Preston a year later. She then formed Preston's branch of the Women's Social and Political Union (WSPU) in early 1907 - a militant suffragette organisation which adopted radical methods to bring about change for women. Her militant activity led to her arrest at least seven times. During her time in prison Edith would take part in hunger strikes and was often force-fed, which led to the WSPU presenting her with a Hunger Strike Medal.

Edith made many headlines over the years: joining the Pankhurst sisters' window breaking campaigns, protesting at a 1909 Preston meeting addressed by Winston Churchill, throwing a black pudding at an MP, and setting fire to soap powder magnate at Lord Leverhulme's holiday home near Rivington Pike. After setting the fire Edith is known to have said: "I want to ask Sir William Lever whether he thinks his property on Rivington Pike is more valuable as one of his superfluous houses occasionally opened to people, or as a beacon lighted to King and Country to see here are some intolerable grievances for women".

The most notorious of Edith's campaigns took place in 1913 and saw her planting a pipe bomb in the Liverpool Corn Exchange. After forgetting to put the Suffragette banner on the bomb, she turned herself in two days later so everyone would know the Suffragettes were behind it. The pipe bomb campaign led to Edith being sentenced to nine months imprisonment with hard labour.

During the Great War the Women's Social and Political Union decided not to campaign on suffrage issues. Edith disagreed with this and joined the Independent Women's Social and Political Union (IWSPU), forming a branch in Preston. She also joined the Women's Land Army, and continued to remain devoted to a life rejecting conventional beliefs about women. Edith was determined to express her independence of mind and courage in her own convictions, with many of the ideals she championed becoming accepted over time.

In Edith's later life she refused to wear clothes and footwear considered appropriate for women in her era, regularly dressing in men's clothing. She was also one of the first Preston women to ride a bike.

Along with her husband, Edith moved to a cottage just outside of Preston which they named 'Marigold Cottage'. Here they made a home with their adopted son named Sandy. It was also here where Edith followed the teachings of Rudolph Steiner and produced food for the war effort. After the Great War, in the 1920s, Edith became a founding member and the president of the Hutton and Howick Women's Institute.

Charles and Edith planned to move to North Wales after his retirement, however, Charles sadly passed away in 1926 before their new house was complete. Edith moved to North Wales alone and continued to follow the work of Rudolph Steiner. She enjoyed a healthy and relaxed lifestyle before passing away in 1950.

Due to her radical views and actions Edith wasn't approved of in her own time. However, many people have now come to respect her passion and contributions to her cause.

The home where Edith lived with her husband Charles can be visited on Winckley Square and makes up part of the self-guided Preston Blue Plaque Trail. You can also take a Winckley Square Guided Walk, run by the Friends of Winckley Square who specialise in Edith Rigby tours.

For an added bit of history, make sure to visit the Earl of Derby Statue in Avenham & Miller Parks; a statue Edith was known for daubing with tar and a "Votes for Women" poster. If you look closely, the marks from the tar can still be seen today.