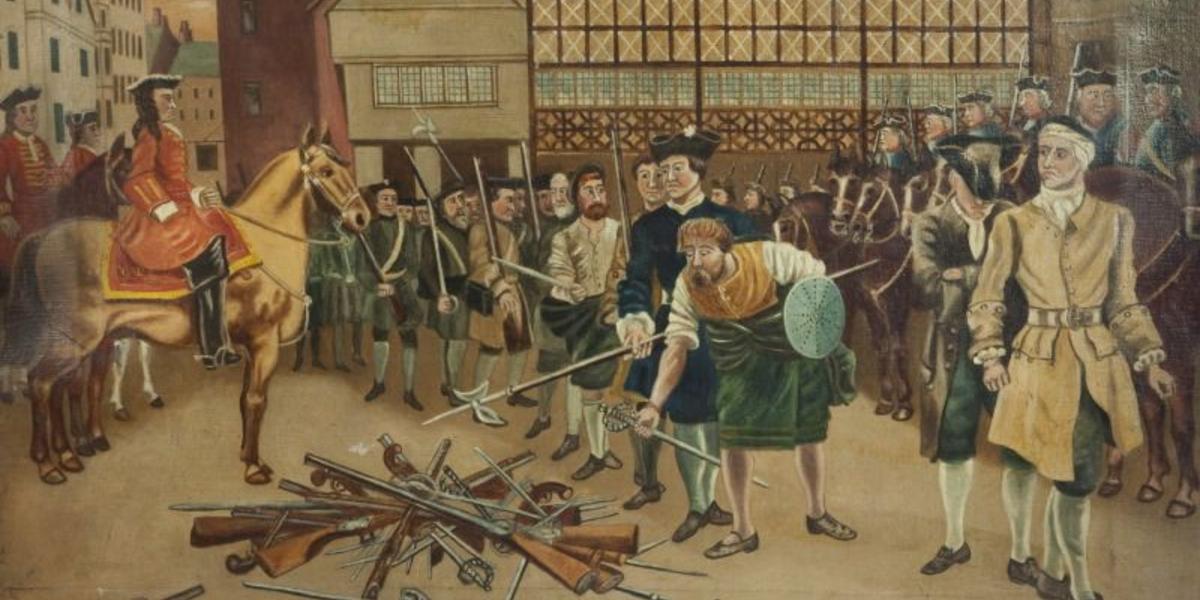 The Battle of Preston (1715) was fought through the streets of Preston in November 1715, the year after the Protestant Hanoverian King George I succeeded the last Stuart monarch Queen Anne. Supporters of Anne's half-brother James - the Jacobites - were trying to overthrow the new King and restore the Stuart line.

The Jacobite army that fought at Preston included both English High-Church Tories, Catholic Lancastrians, and Scottish Jacobites. A force setting out from north-east England was joined by Scottish Jacobites on the Borders and then marched south through Carlisle and Lancaster, growing to around 4,000 in number by the time they reached Preston.

The main Jacobite forces arrived in Preston on 10 November. They proclaimed James III as king from the steps of the cross which stood on the Market Square (commonly known as the Flag Market).

Meanwhile, General Charles Wills was ordered to halt their advance and was on route from Manchester with six regiments. In response, the Jacobites took over the centre of Preston and set up barricades on the main streets into the town.

At the same time as the battle in Preston, a larger Jacobite army was fighting the government at the Battle of Sherrifmuir, near Dunblane in Scotland.

The main fighting took place on 12 November. Jacobite troops defended the town centre at barricades on Church Street and Friargate. The government troops, under General Wills, attacked immediately up Church Street but were driven back with over 100 casualties. More Government forces then skirted round the town to the north and launched a new attack on Friargate, setting fire to buildings in both locations. Wills aim was for the fires to spread to the Jacobite's positions and the Jacobites tried to do the same to houses taken at government positions. When night came, Wills ordered the government-held positions to be lit for identification, this ultimately aided Jacobite snipers.

More government forces arrived on the morning of 13 November and found the town was insufficiently encircled. Wills stationed more troops to prevent the besieged Jacobites from escaping. After suffering losses in the fighting and being surrounded, the Jacobites were split about whether to continue fighting. The Jacobite leader, Forster, chose to surrender early on 14 November.

Overall 17 Jacobites were killed and 25 wounded. The government casualties were close to 300 killed and wounded.

The impact on Preston was bloody and long-lasting. In the aftermath, government troops looted the town, 12 of the Jacobites were executed on Gallows Hill, near Moor Park, and the interior of Preston Minster was destroyed by prisoners housed there through the following winter.

1,468 Jacobites were taken prisoner, 463 of them English. All surviving prisoners were later pardoned by the Indemnity Act 1717, with the exception of members of Clan Gregor.

If you'd like to see some of the sites and learn more history about the battle then you can follow the Battle of Preston 1715 Trail.

You can also learn more about the Battle of Preston 1715 by visiting the Harris Museum.